China retaliates with tariffs after US begins trade war 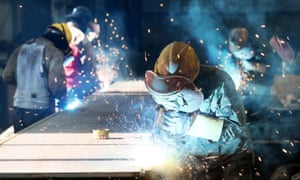 A long-threatened trade war between the US and China has got under way after the world’s two largest economies imposed tariffs on each other. The US implemented tariffs on $34bn in Chinese goods, to which Beijing responded with levies on a similar quantity of US imports.

Minutes after the US tariffs went into effect at 12.01am on Friday US time, a spokesperson for China’s ministry of commerce said, “China promised not to fire the first shot, but in order to safeguard the country’s core interests as well as that of the people, it is forced to fight back,” according to Xinhua. The ministry stopped short of saying China had implemented its retaliatory duties.

Later on Friday, a spokesman for the ministry of foreign affairs said after the US tariffs kicked in, Chinese tariffs on US goods had immediately gone into effect.

Ahead of the tariffs, Chinese state media published a series of editorials criticising the US and emphasising the country’s readiness for a trade war. Chinese companies and investors girded for the worst, while economists cautioned any impact on the economy would be minimal.

“If what the US wants is to escalate a trade war with China, then so be it. A little fighting may be the only way the Trump administration clears its mind and allows everyone to sober up,” the state-run Global Times said on Friday.

“The Trump administration is behaving like a gang of hoodlums with its shakedown of other countries, particularly China,” said an English-language article in the China Daily. On Thursday, a spokesperson for China’s ministry of commerce said the US will be “opening fire on the whole world and also opening fire on itself.”

China’s central banker said Trump’s promised tariffs of 25% on $50bn of Chinese goods – Friday’s $34bn to be followed by $16bn in a few weeks – would shave 0.2 percentage points off of China’s GDP and the “overall impact would be limited,” according to Xinhua.

Still, Chinese investors and companies were worried. The Shanghai Composite index was down 1.1%, after reaching more than a two-year low this week before rallying after the tariff deadline passed. Chinese manufacturers have already been hit by a strengthening yuan that has made exports more expensive.